I decided to go to Day 2 of Comic Fiesta 2011 to support the Lolita Fashion Runway! I'm not comfortable with going on stage for any reason, so I didn't enter the show, but I still wore loli to show my support!

It was really nice seeing all the other girls again :) Gosh, I think the last time I saw them was at last year's CF!

This year was a predominantly sweet crowd. I think there were only two of us that I could safely identify as classic, with another two or three somewhere in between sweet and classic.

I'm pretty proud of my outfit today! It was a last-minute thing, and ended up looking pretty good for something I was scrambling to put together at 1am the night before. 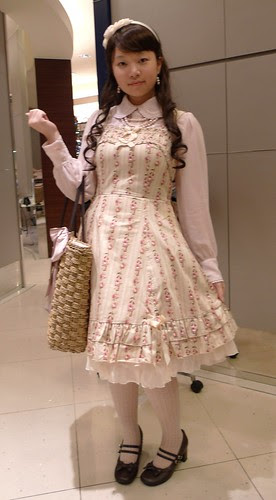 Also - that's a new wig I'm wearing! It looks a little off in this photo, but it looks really great :D It's half-tied at the back, and I clipped two dusty pink Surface Spell roses onto the tied-up part.

I was originally carrying a different brown bag, but the handles started flaking off :/ I'll have to see how I can repair that because I really love that bag! The bag in the picture was originally a carrier bag for some things I promised a few friends.

Uh, don't mind the edited and blurry picture! It was a rushed picture taken in my hair salon (had a wedding dinner to attend the same night). Also, don't mind the tired derpface - it was tiring facing the crowds, and I was very tired from the Christmas party the night before and getting up at 5.30am that morning to help with church stuff.

Outfit breakdown:
JSK: Bodyline
Blouse: Innocent World
Petticoat: In The Starlight
Tights: Aldo (I think)
Shoes: Secret Shop
Original Bag: Midofi - replica of IW violin bag in brown
Bag in picture: Aldo, with a dusty pink LV scarf tied onto it
Headbow: Aldo
Earrings & necklace: I think it's from somewhere in San Francisco, but it could also be something my jeweller made for me.
Wig: Somewhere on TaoBao
Posted by Priscilla at 00:57