Trirose and I had an amazingly fun weekend! We had tickets for the Distant Worlds 2012 Kuala Lumpur concert on Saturday night, so we planned a girl's weekend at my house!

I had a facial on Saturday morning and had to finish up buying Christmas presents for the extended family, so Trirose only came over at 3.30pm. We were originally planning to wear kimono, but after dithering about, we decided to wear lolita instead ^^;;

Because we were chattering like magpies about anything and everything, we finally finished getting ready by 5.50pm! We took some quick outfit snaps before leaving the house and heading towards KLCC for a very lovely dinner at Harrod's and the concert. 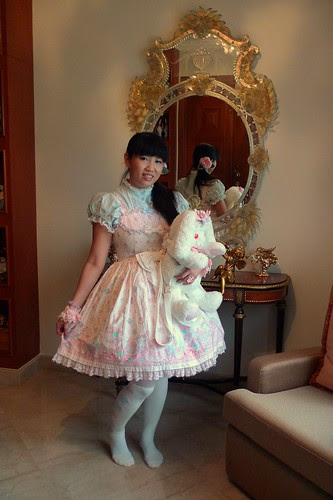 Trirose is wearing AP's Memorial Cake! And BtssB's Usakumya bag, which is so adorable and so cuddly *___* This photo is sans shoes, because the proper shoes for her outfit was in her car hahaha.

This outfit was actually chosen as a back-up to her kimono outfit - she'd painted her nails this awesome teal colour to match her BtssB yukata, so her back-up lolita outfit was also pink and blue hahaha. It matches really well! I love pink and blue together ^__^

Here is another shot she took in the Dewan Filharmonik washroom, including shoes: 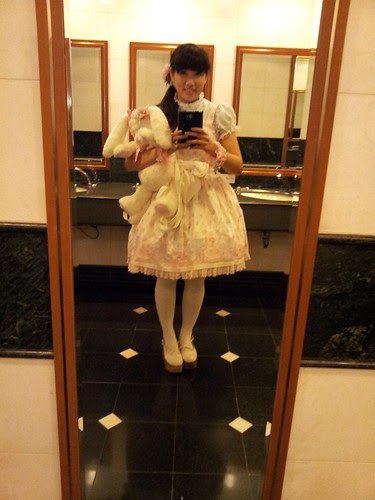 Here's a sneak shot of the orchestra she took as well, hee! 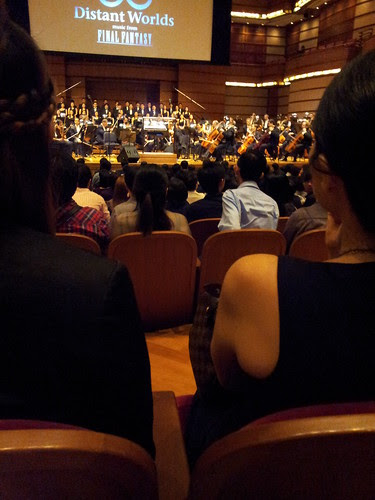 The concert was all sorts of awesome!! They played most of my favourite songs that they didn't play in London!! I was so excited! Liberi Fatali, Man with the Machine Gun, To Zanarkand, Suteki Da Ne... The only one missing was Fisherman's Horizon! But I was really pleased to hear the Maria and Draco Opera again, as well as FFIV's Theme of Love ^_^

The orchestra itself - I feel so proud of Malaysia! It wasn't as perfect as the London concert, but I say the MPO did a damn good job! Well done, guys! I'm looking forward to attending more concerts by the MPO again :)

Eh, *coughs* went on a bit of a rant there. But it was awesome!! Though I'm also wondering how much of my excitement was also from having had a glass of really good port right before the concert hahaha.

Anyway, back to the outfit snaps - here's mine! 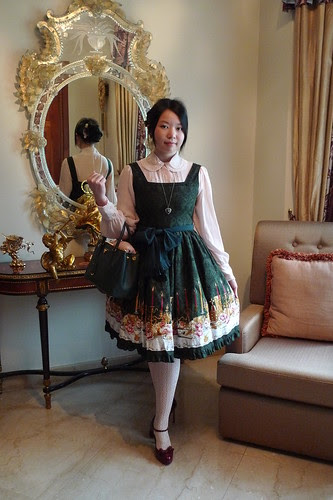 As always, I decided to go for a more Classic Lolita look. It was kind of a spur-of-the-moment decision - Trirose has the same Dim Light JSK, and we've been brainstorming (sort of XD;) for outfit ideas when it occurred to me that the roses have quite alot of pink on them, so dusty pink should match the JSK pretty well. I brought out these pieces so we could see them - and next thing you know, the outfit was on me hahahaha.

I love this blouse - it's an Innocent World dusty pink chiffon blouse that I got in last year's Halloween LP and it's gorgeous <3 It looks good with almost everything!

I paired the outfit with my bordeaux LK Bennett Mary Janes because they were the only shoes that matched other than a pair of tea parties, and I was very determined to wear heels and make the outfit look more grown-up-lolita. Er, that's why I put my hair in an updo as well hahaha. It's difficult to see in the mirror, but my hair has a pink rose and the two green bows in Meta's Dim Light series (the haircombs).

The handbag was an exact colour match to the waist tie! What a coincidence! We were both very excited when I found the bag in my mum's closet hahaha.

The neckline felt a bit too simple and plain after I took off the brooch that came with the JSK, so I plonked on a plain necklace and matching earrings and ring. I think the minimal accessories helped with making the outfit more grown-up looking!

By the time we got home and chattered more and went to bed, it was nearly 3am so I'm pretty knackered hahaha. Will blog a bit more about Sunday later.

Toodles!
Posted by Priscilla at 19:49

Wow, you look so pretty (as always) and christmas-y. I love it!
And Trirose is pretty as well (but I don't like pink, so I'm not crazy over her dress).

Aw thank you! ^_^ I think this dress looks very Christmas-y, and I really should've thought of saving it for Christmas instead hahaha! But I'm still glad I wore it that day :)

I love the coords, you both look so elegant yet cute! Dim Light is such a beautiful dress and you really did it justice.