I've always loved lolita fashion - in fact, it was a hobby-related love of mine before kimono or even cosplay! In London, I rarely went to Camden Town Market, but whenever I did, I almost always made a beeline for one of the lolita shops there. However, being rather stingy and unsure of how well it would suit me, I rarely ever bought anything.

Last week, I had received my first paycheck from my first official job. I decided to treat myself. Having recently found a few lolita shops around KL, I tentatively searched one out.

Although unforeseen events kept delaying my trip to the shop last weekend, I finally managed to make it late on Sunday evening. The shop (i-Socks in Times Square, if you want to know) is rather complicated and bothersome to understand - there are 4 or 5 outlets on the same floor of the same mall, and all but one of them are open to the public. That last store is the VIP store, which of course sells the better stuff.

In order to get to the VIP store, you need to go to one of the public ones and make a purchase of RM20 or more (I've heard varying minimum prices, but this one seems the most common). The shopkeeper may then give you a slip that will allow you a single-time entry for up to 3 people into the VIP shop. There, you must spend a minimum of RM100 (or so I've heard. I definitely went waaaaay past that) to obtain a VIP card, with which you may enter the VIP outlet anytime.

Of course, all this research was done before I went to scope out the shop :P

So in we (my sister, her boyfriend and I) went into a few of the public shops. I found a few things that I liked in one outlet, and bought them. Along the way, I was discussing lolita fashion with the shopkeeper, and she suggested that rather than dresses (which I'd mentioned I liked, but was worried about how I'd look in) I ought to try a skirt + blouse + corset combo. I rather liked the idea, despite having never really tried it out before, and immediately thanked her for it.

Once I was in the VIP store, I asked one of the salesgirls there for her opinion on what would be nice, and what would fit me. I mentioned the combo that was recommended to me, and that I liked black and white the best. She began pulling out stuff and coordinated an outfit for me, complete with shoes and headdress.

I did browse around the whole shop, in the vain hope of finding something else that fits me, but didn't dare buy anything other than the outfit that we'd already picked out.

And so, I finally bought my first lolita outfit. The best part of it is that it was on sale, and I got 30% off everything! Yay! Also, I paid for it with my own money - so no one can complain about spending money on such things, because it is, after all, my own money. Yay!

When I got home, I was really excited about putting it on. However, I had to wait, because first, I had to cook and eat dinner, shower, dry my hair, etc etc. By the time I'd finished doing everything and had the time to dress up, it was already midnight, and everyone was in bed.

Buuuut... I was so excited over my first lolita outfit that I couldn't sleep, and ended up trying on the dress anyway! ^^; 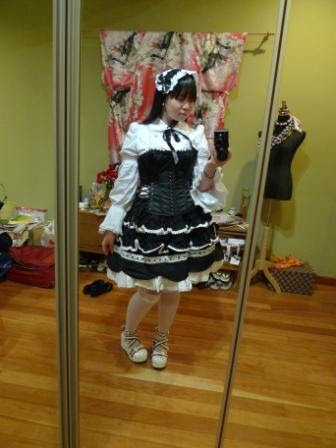 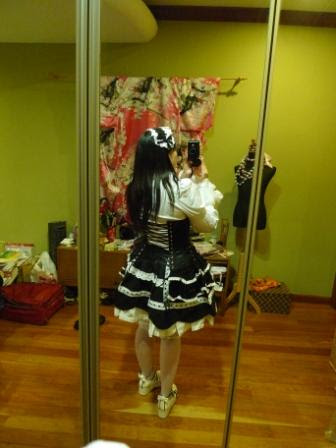 The outfit still isn't complete yet - I haven't gotten a good pannier, or a proper bag, and I'm not entirely satisfied with the stockings and shoes. I rather think I'd prefer white stockings with a bow, and black shoes with white lace. The pannier I'm using is also an old tailor-made one that's really flat now, and I have absolutely no lolita bags whatsoever! Oh well. Back to the shop this weekend!! XD XD

I also kind of have a slight issue with the corset - while I really like this look, I've read that corsets and lolita just don't mix. Well, I'm not really sure if what I read really meant proper figure-shaping corsets, or "bodices" like mine. But either way, I've heard that it doesn't sit well with lolita except in a few styles (corsets feature quite often in the aristocrat style) or if it matches the outfit in general. I'm really worried about whether or not this outfit does conform to proper lolita guidelines :/

On the other hand, I think that maybe it might look better if I added white lace to the corset? Or maybe I could leave the corset as-is, and use it with a black blouse, long skirt and elegant hat to achieve the "aristocrat" look. All you lolitas out there, what do you think?

I did think for a while that since this outfit was recommended by the shop people, it should be proper lolita. But then, I've read some very mixed reviews of i-Socks, so I'm not 100% confident that I can trust that the corset is lolita.

Some people love the shop and proclaim themselves everlasting fans of the shop. Others look down on it with scorn and say that the store sells low quality stuff (quite true to an extent, but the things in the VIP shop seem to be of a nice quality. Then again, what do I know?) and that this store is to blame for giving the lolita look a very "lala" reputation in Malaysia. ("Lala" is a very difficult term to explain... ^^;)

I myself, as a very new person to this sort of fashion, can't really form an opinion until I've tried the branded items. Only one problem: SIZE! I've looked through the brand shops' online stores, but I come across things that fit me very rarely. :( So for me, I'll take what I can get, and so long as I can fit into the clothes, I'm not really bothered much about quality for now.

*coughs* Well, enough of all the rant. Please comment ^_^ Thanks for reading!
Posted by Priscilla at 14:42